Redundant Array of Independent Disks or RAID is a type of storage configuration that uses striping, mirroring, and parity checking to increase disk performance and reduce the risk of data loss. RAID arrays essential in servers and workstations where fast and reliable data storage systems are an absolute necessity.

While modern motherboards natively support RAID, the number of storage ports and PCIe lanes available for the storage devices is limited. Due to this limitation, add-on RAID cards provide extra storage space while allowing the storage devices to run at full speed.

In this guide, we will show you the best PCIe 3.0 NVMe RAID cards with onboard switches currently available on the market. Not many of them are out there, and therefore your choice is limited. But it helps to know which RAID expansion card is best for your desktop, workstation, or server needs.

What to look for when buying an NVME RAID expansion card

If you’re in the market for an NVMe RAID card, it is essential to know which features to look for when buying a RAID expansion card.

The card interface is vital in RAID cards because some NVMe SSDs are so fast that they can saturate the PCIe lanes. For example, setting up four 3,500 MB/s NVMe drives in a RAID 0 configuration can push the array’s overall speed to roughly 14,000 MB/s. If the RAID card has an x8 bus interface, you leave a lot of performance on the table since the x8 lanes can only handle 8,000 MB/s of data traffic. Therefore, a card with a wider PCIe 3.0 x16 interface with a bandwidth of 16,000 MB/s is ideal in this scenario.

If you plan to use slower NVMe drives, do the math to ensure that your RAID card does not bottleneck your drives. Also, take a good look at the specifications since some cards have a physical x16 interface but are electrically and logically configured to x8.

Another thing to consider when purchasing a RAID card is the type and number of expansion slots. RAID cards accommodate various kinds of storage devices from HDDs, SAS drives, and solid-state drives. While there are hybrid RAID cards that support two or more storage types, in most cases, RAID cards only support a single storage type or variant thereof. If you’re planning to add additional drives in the future, the more expansion slots or connectors, the better.

RAID cards come with different PCIe controllers with different lane and port configurations. The controller is essentially the heart of the RAID expansion card. It handles all the data flowing into and out of the device and allows all the RAID group drives to run at full speed.

Bifurcation is the method of splitting a PCIe bus into multiple smaller buses. For instance, a x16 bus can be bifurcated into x8/x8 or x4/x4/x4/4. Some motherboards support bifurcation while others do not. This is also true with RAID cards.

On RAID cards with dedicated controllers, bifurcation is done within the card itself. The lanes of the controller are bifurcated into upstream and downstream ports of various widths. For example, a RAID card controller with 24 lanes and five ports may have eight of its lanes organized into a single x8 upstream port with the rest of the 16 lanes bifurcated into four x4 ports. On-card bifurcation allows the NVMe storage devices to run at their rated speeds without bottlenecks. 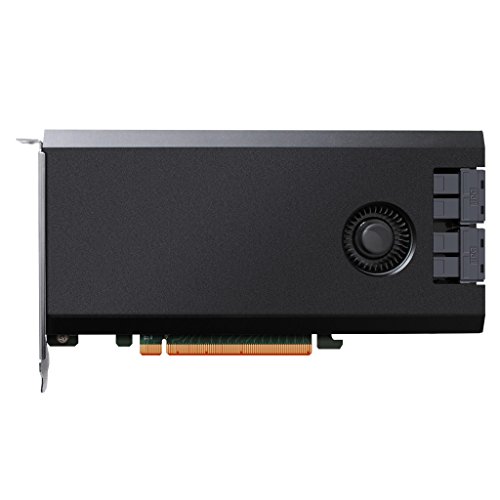 If you’re looking for an all-around RAID storage solution, HighPoint’s SSD7110 got you covered. The SSD7110 offers a hybrid solution that allows you to use NVMe drives, SAS, or SATA hard drives at the same time. With three M.2 ports and four SFF-8643 connectors, they can host a whopping 19 storage devices.

The SSD7110 sports a PCIe 3.0 16x interface capable of handling 16,000 MB/s to handle the massive amount of data traffic. The SSD7110 is equipped with two switches to manage the lanes of the M.2 slots and SFF-8643 SAS/SATA ports. The SSD7110 supports RAID 0, 1, and 10,  in addition to RAID 50 and JBOD. The SSD7110 can be configured using HighPoint’s RAID management software, which makes RAID setups a breeze. RAID can also be set up and configured via Windows, Linux, or macOS.

Keeping things cool is a massive heatsink that dissipates heat away from the switch and SSDs. Cooling is aided by a small fan which provides minimal but sufficient airflow.

We highly recommend the HighPoint SSD7110 for users who want a fast and expandable RAID storage solution. The SSD7110 is capable of hosting 19 storage devices, which, when fully populated, translates to an enormous amount of storage density. Moreover, the SSD7110 supports NVMe boot for blazing-fast boot times. Other than its lack of RAID 10 support for NVMe, the SSD7110 has all the boxes checked out. 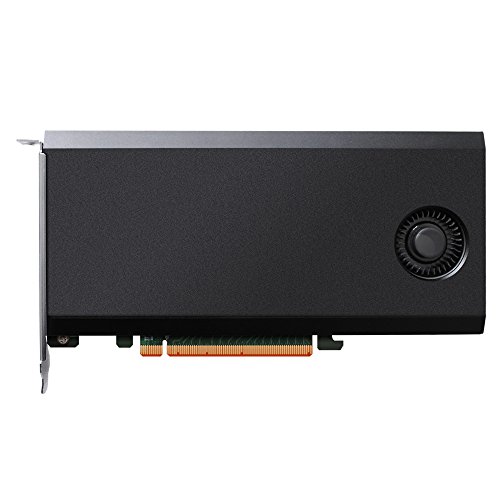 The High Point SSD7101A-1 is arguably the best NVMe RAID expansion card on this list due to its speed and scaling capability. In contrast to the hybrid SSD7110, the SSD7101A-1 is an NVMe-only RAID host card. Despite the lack of SAS/HDD support, the RAID card packs a couple of features that sets it a cut above other cards in this list.

The SSD7101A-1 has a 16x wide interface with each M.2 port allotted with 4x PCIe lanes. The expansion card features a configurable 48-lane, 5-port, PEX8747 switch. The PEX switch has a wide x16 upstream port and four downstream ports which can be set to run at x16 or x8. In theory, the x8 wide downstream ports can handle Gen 4 NVMe speeds!

Another great feature of the SSD7101A-1 is its Cross Sync RAID capability. When paired with another SSD7101A-1, the setup can run at twice the overall transfer rate and storage capacity. The add-on card comes with a large heatsink to cool the solid-state drives. A small fan provides additional active cooling to blow hot air out the back of the card.

If the HighPoint SSD7110 is too much for you, the SSD7101A-1 is an excellent alternative for half the price. The SSD7101A-1’s PCIe switch allows it to reach insanely high transfer speeds. The expansion card supports Cross-Sync (pairing) to double performance and storage capacity. All said, we highly recommend HighPoint’s SSD7110 for users who want a fast NVMe-only RAID expansion card. 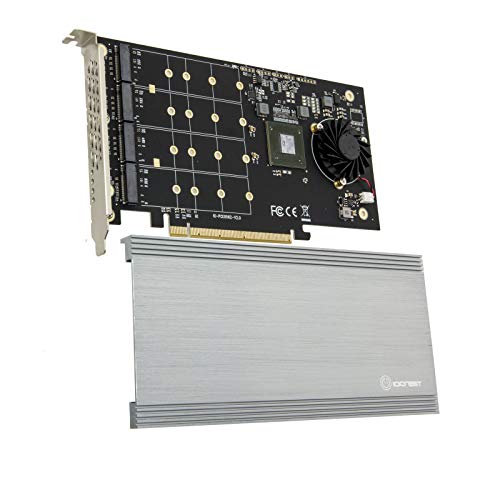 The Syba I/O Crest SI-PEX40152 is very similar to HighPoint’s SSD7101A-1 when it comes to features. Both have PCIe 3.0 x16 bus interface, have active cooling, and both can accommodate four M.2 NVMe SSDs. Despite their similarities, the SI-PEX40152 just couldn’t compete with its analog when it comes to throughput.

At the heart of the device is a 32-lane 6-port Switchtec PFX-L 32xG PCIe switch with a x16 upstream port. The wide upstream port allows the NVMe drives on the SI-PEX40152 to reach speeds of up to 10,500 MB/s. Downstream, the four M.2 slots are each allotted with a dedicated x4 bandwidth.

Physically, the SI-PEX40152 is solidly built. The card comes with active cooling in the form of a single 40mm fan. A massive heatsink covers the entire PCB, so the SI-PEX40152 will stay cool under load and extended use. 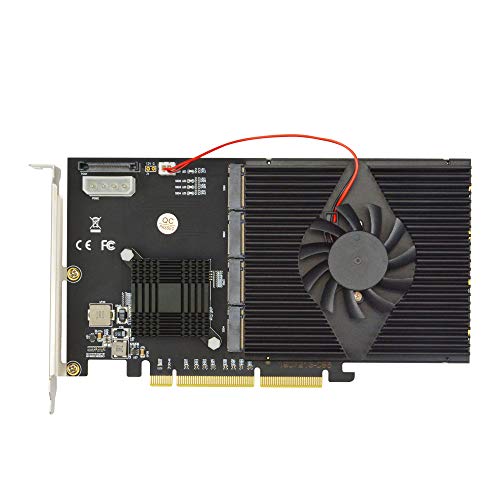 The A ADWITS Quad is another add-in RAID solution designed for M.2 NVMe solid-state drives. The expansion card features four M.2 slots with a x16 interface. The Quad technically has an x8 logical interface but allows for up-plugging into a x16 slot. The split PCI-Express connector configuration is a neat feature since most modern consumer-grade boards do not have a x8 PCIe slot.

At the core of the device is an ASMedia ASM2824 PCIe switch with a single upstream port running at x8 speeds. Downstream, the ASM2824 fans out to four x4 ports for each M.2 slot. On paper, the Quad claims a maximum bandwidth of 6500 MB/s, just below the 7880MB/s maximum theoretical bandwidth of a x8 interface.

The Quad supports RAID mode setup via OS or through a third-party RAID management software. To keep things cool, the A ADWITS controller comes with an anodized heatsink which is actively cooled by a single fan. The controller also has built-in supplemental SATA and Molex power connectors for power redundancy.

The ADWITS Quad is a flexible and cost-effective RAID solution that we highly recommend. If you plan to use only M.2 NVMe drives for your RAID array, the Quad has everything checked out. A fast switch, sufficient M.2 slots, passive cooling, plus a few extra features such as additional power connectors and up-plugging capability. 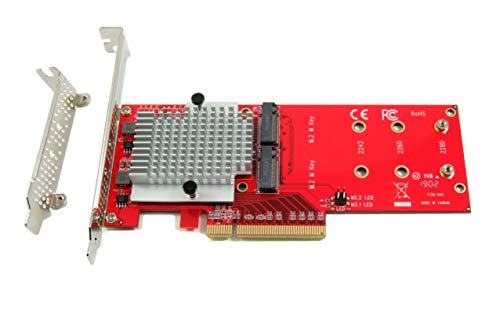 If you’re looking for a basic NVMe RAID card, the Ableconn PEXM2-130 might suit your needs. The PEXM2-130 can be populated with two M.2 NVMe solid-state drives. The expansion card features a x8 physical interface that has more than enough bandwidth for two NVMe devices.

The PEXM2-130 sports the ASMedia ASM2824 PCIe switch with 24 lanes. The available lanes are divided into a single x8 upstream port and four x4 downstream ports. Since the PEXM2-130 only has two M.2 NVMe slots, two of the downstream ports are unused. Effectively, there is a 1:1 ratio of upstream and downstream lanes on the switch.

Ableconn’s PEXM2-130 is a cost-effective RAID storage solution for those with a limited budget or those who don’t plan to use more than two NVMe drives in RAID. Its x8 interface has sufficient bandwidth for two fast Gen 3 NVMe SSDs. Overall, the PEXM2-130 is an affordable but capable RAID card perfect for budget-oriented systems. 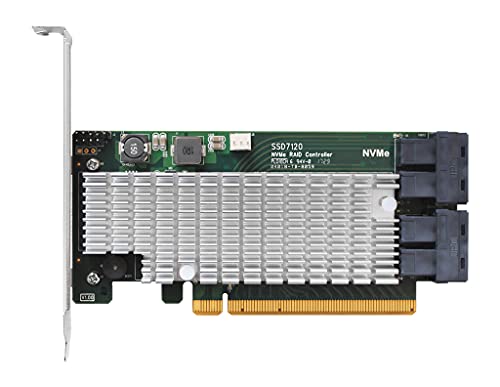 Physically, the SSD7120 comes with four SFF-8639 connectors with dedicated PCIe x4 lanes for each U.2 solid-state drive. Aside from its high-speed capability, the SSD7120 also supports pairing with another SSD7120 expansion card. This configuration allows both cards to run twice the speed and twice the capacity of a single card.

We highly recommend the HighPoint SSD7120 for users who prefer to use U.2 NVMe drives in their RAID setups. The SSD7120

What is the difference between M.2 PCIe adapter cards and M.2 PCIe RAID cards?

What is the difference between hardware RAID and software RAID?

In hardware RAID, a dedicated controller manages and processes the workload of the RAID array. In contrast, software RAID is dependent on the operating system, and the CPU does the processing. HDMI 2.1 is the latest upgrade to the HDMI Specification. This roundup reviews the new features of HDMI...
Read More The Crave PowerPack 2 is a powerful external battery charger, with a 50,000mAh capacity capable of charging up...
Read More